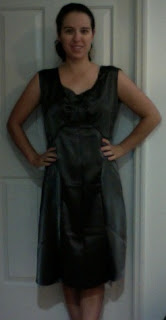 Yesterday I finished all the remaining headcoverings and chaplets that had been ordered in the past month. It's the first time all month I've been completely caught up on paid for orders, although things have been working out perfectly, with each new order coming in within twelve hours of finishing the previous order.  I have a few custom orders I've been working on, that I'm finishing up, but last night I paused to do a task that I've been dreading for the last two weeks.

I got out my new sewing/embroidery machine, with the manual and decided it was time for the machine to do more than decorate my bookshelf.  For the last few weeks I'd been so busy with all the orders that I knew I needed to finish each night before the girls woke up, that I didn't have time to sit down and learn how to thread the bobbin, or use the auto threader to thread the needle (that was the toughest part... I've never had a problem threading a needle, and for a while I just did it manually, but I did want to figure out how the auto-threader worked, and when I finally got it to do what it was supposed to do I felt like I deserved a medal!).  Being busy is a very, very good thing, but it meant that the sewing machine would wait a little longer.

I didn't want to try the sewing machine out on an actual order.  That could be disastrous.

So instead I decided to do something that was slightly insane, while learning to use my machine.  I got out the fabric that I had managed to cut out during nap time one day, and began sewing a dress.  More specifically, I began sewing a satin dress, while ignoring the small voice of reason that was determinedly asking if I'd lost it.  Satin is, after all, not my favorite fabric to sew.

After getting the sewing machine set up to sew I made it all the way to step two on the pattern before I encountered a problem.  I needed to "gather" the fabric around the bust.  On my old sewing machine this would have involved turning a dial.  On the new sewing machine it involved a fancy touch screen (that I didn't realize was a touch screen) with a bunch of buttons with no words.  I looked at the manual, which showed buttons I couldn't find.  I tried pressing the buttons that were there, without luck.  Finally I realized it was a touch screen (the problem with reading only the part of the instructions about the specific task I was trying to do) tapped it, and the buttons in the manual magically appeared on the screen.  And voila, I could adjust the stitch length.

The machine sews beautifully.  I still have to finish the sleeves, hem and neckline on the dress, and add the zipper but I'm pretty excited about how it's coming along so far.  I do wish I'd used a more casual fabric, because the satin looks really fancy and it would have been more practical to make an everyday dress that I would wear more often.  Or maybe I'll just wear this anyways, day to day, because the crepe back satin I use has already shown, via the princess dresses, that it's really, really tough.  I went with this particular satin because I had so much of it laying around, that I got during a sale months ago, and I decided to test my poor pattern reading skills on it, before moving on to a fabric that I liked more.

This is a big step for me.  I usually don't use patterns and just make things up as I go along, which either turns out very well, or ends in disaster.  I'm like this with cooking and knitting too.  Following instructions is apparently a weakness of mine.  I always end up with some idea I think is "better" and end up switching things around.  But I'm determined to follow this pattern all the way through...  and I'm hoping (and expecting) to learn a bit about pattern reading (and patience) along the way!
Posted by Cammie Diane at 9:32 AM