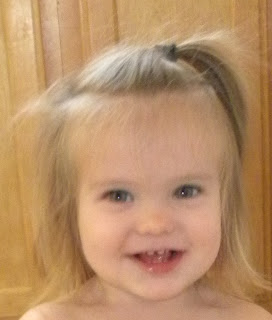 Sadie and Mae had their very first karate class today.

Okay... it wasn't a typical karate class.  Mommy was the sensei (Show of hands:  how many of you knew I actually am a real sensei?  It doesn't come up often here!).  It took place in our living room after we picked up the toys (Sadie is seldom that enthusiastic about picking up her toys!).  And in the beginning it was a private lesson, with just Sadie, who had begged for nearly an hour before our little lesson to start learning karate so that she could be a "rescuer."  She's very into "rescuing" Mae Bae these days, regardless of whether Mae wants or needs to be rescued.

To really explain how excited Sadie was about her "karate class" I'd have to add that she actually agreed to wear pants.  Of course she changed out of them moments after our lesson was over, but getting her into pants any other time is pretty much impossible.  We had tears at bedtime when I only had pants and a shirt for her to wear as pjs... because she had her heart set on a nightdress that was in the hamper...

Mae didn't take much notice of what we were doing at first. She was playing with a flashlight that Sadie has swiped out of my closet.  After about twenty minutes she noticed and came over and laughed hysterically at every punch or kick.  She loved the sound of my gi snapping with each kick and she was especially amused by the fact that I was counting out loud in Japanese. 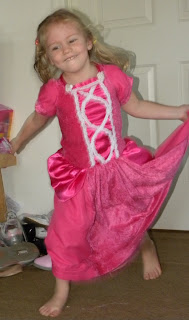 After she stopped hysterically giggling, she joined in and we saw Ninja Mae Bae return.  Sadie was a little hesitant when she was beginning to learn to punch.  Mae watched us and started throwing punches left and right as fast as she could while still laughing.  She practiced in the bathtub.  She practiced while Nani was on Skype.  So I guess she's pretty enthusiastic too.

By the end of the lesson Sadie had actually managed a few pretty good kicks.  Not bad for a three year old!  I kind of wish I'd started when I was three!

I've decided to start training again for exercise and I have a feeling that Sadie and Mae's enthusiasm to "practice karate," will be good motivation to train daily.  It would be nice to have a place to train outside the house, maybe once a week... but I have a feeling that's a few years off!  Maybe after Paul graduates.

I haven't mentioned karate on her very often, but it used to be a big part of my life.  I have a black belt in Shorin Ryu Karate, a brown belt in Kyokushin Karate, a green belt in Taekwondo and I studied Aikido and Wushu for a bit in college (I was horrible when I gave Wushu a try when I was in Cape Town... it was too different from all the training I'd had previously).  I taught a class briefly for the recreational sports department at my college, but hadn't had the time to train very often in the past half decade.  Now it'll be something fun that the girls can learn with me, that will mean a little more exercise.  I have a feeling I'm going to be sore tomorrow morning from the little we did today!  It's definitely a good way to get back into shape!
Posted by Cammie Diane at 10:14 PM