Mae and the Apple 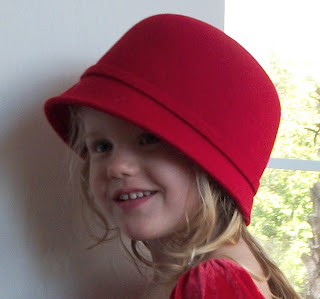 Today was better than yesterday.  We woke up to blustery gusts of wind and while the forecast was still warm, the girls and I were able to sit inside and watch the storm clouds and the trees being whipped back forth by the wind and pretend that it was winter (although I do believe the air conditioning still kicked on several times today).

Sadie woke up and announced that her tongue was "all better," until she actually stood up, quickly swallowed the Tylenol I had for her and looked at me sadly before saying:  "I think I need more medicine."  As long as I remembered to give her the next dose exactly on time, she was fine.  If I was half an hour late she would be dissolve in tears at the drop of a hat for the next hour.  That was plenty of motivation not to forget!

Lately Sadie has been very into "saving" Mae Bae.  I can be in the kitchen washing dishes and know that if Mae Bae is doing something even vaguely naughty, Sadie will race into the kitchen to give me updates. Today I'd just walked from the dining room to the living room when Sadie followed after me and said something along the lines of:  "Come quick Mommy!  Mae Bae is dying!!!!"  Since I'd walked by Mae all of five seconds earlier, I was fairly sure she was just fine.  But I turned and walked the ten steps back into the dining room and instantly understood what she meant.  Apparently Sadie takes her fairy tales very seriously.

Nani had just sent the girls a big box of presents, and Sadie had instantly changed into the Aurora PJs that were in the box, while I'd put Mae in the Snow White PJs.  Now Mae, dressed in her Snow White PJs, was in the middle of the dining room eating an apple.  And for the rest of the day anytime Mae Bae went picked up an apple Sadie would repeat her announcement.

On a different note, I am really, very glad we took Sadie in to be seen yesterday.  While we were at the hospital the doctor told me what the healing process for a hurt tongue looks like, and what to watch for and I have to say that if he hadn't described it, I would have been totally and completely panicked today.  I will be so, so, so very happy when this particular ouchie is completely healed.

Now to get some sleep.  In half an hour it will be tomorrow.  I sewed six snoods tonight, so at least I feel like I got something done after the girls went to bed!
Posted by Cammie Diane at 11:31 PM