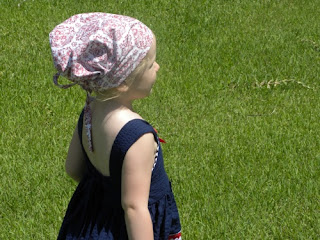 So she's becoming more ambitious by the week.  She also patted my stomach and announced that there was a new baby in there.  I think the child just assumes that I'm pregnant 365 days a year.  And apparently she's now wishing for sextuplets.

Well... at least she's not totally against brothers any more...  that's a relief.
Posted by Cammie Diane at 7:54 AM