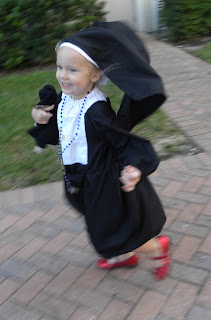 Sadie is currently, kneeling across the room from me, praying the rosary along with her Holy Baby DVD, in her full "Marie Therese" regalia.  She's told me about five times today that she's going to be a nun, and begged me to search for her nun outfit and help her squeeze into the veil, which is now way too small, before asking to watch her "Marie Therese" movie.  I know the movie she means.  She wants to watch "Therese", but since I've noticed her terror of me dying seems pretty directly linked to us watching that movie, we're avoiding it until she's a bit older.

We've continued reading the Catholic Children's Treasure Box books, which talk about Saint Therese praying a lot, and apparently are having quite the effect.  Today's book talked about Therese kneeling while she prayed and now Sadie is enthusiastically kneeling, which I hope will carry over into Mass (I bet it would if I let her wear her nun outfit).

In other happy news, January is apparently a good month for headcoverings!  I was nearly finished with the six headcoverings I'd been working on for orders earlier this week, when six more headcoverings were ordered yesterday!  If this keeps up, I might actually be able to start paying off bills, which would make me very, very happy!  I went and bought three yards of fabric for my most popular snood, after selling out a second time, and was happy that the print was still in stock.  Three yards makes around nine snoods, a few convertible headcoverings, with enough fabric left over headbands too, so that ought to keep me busy for a while!  Sadie's even asked for a black and white snood, one of those rare instances where something doesn't have to be "Pink!!!!"

To stress the importance of "pink" in her life at the moment, I'm slightly surprised that she hasn't demanded a pink "Marie Therese" dress.  When she saw the red velvet dress I'd made for Christmas morning one of her first comments was:  "I wish it was pink!"  Ah yes.  There is an awful lot of pink in our world these days!

We're also readjusting to Paul being back in school.  I think this is the craziest semester in law school and so we've pretty much said goodbye to seeing much of him until mid-May.  Thankfully living on campus means that we at least get to sit down to lunch and dinner as a family, and I've very grateful for that!  I think we've just about adjusted to the new "normal" at the moment!

As long as we don't have any more disasters!!!
Posted by Cammie Diane at 11:47 AM