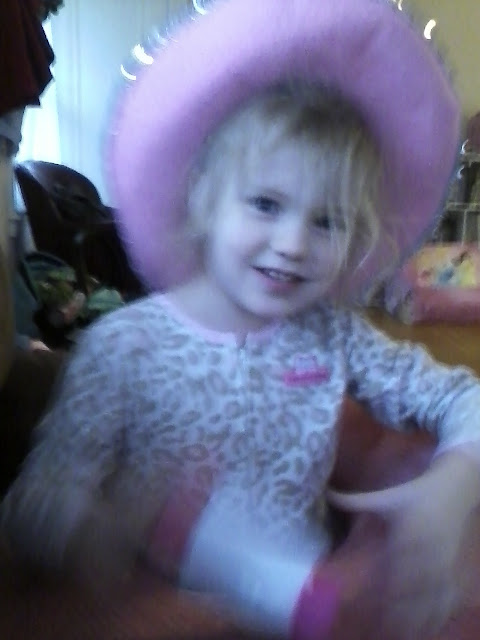 I'm not sure that this picture quite conveys the level of crazy that Sadie and Mae achieved today.  They were on a roll.  The photo might convey what the day was like a bit better if you could see that she was also wearing a pink tutu over her pjs and was walking around with my pink boppy nursing pillow on, as a skirt, above that.  And we can't forget about the half smashed pink cowboy hat she's wearing.

It was like the Thanksgiving meal gave them super amounts of energy that they expended doing every possible naughty thing that they could think of (I think the high point might have been when Mae climbed up on the dining room table and began to jump up and down as high as she could). 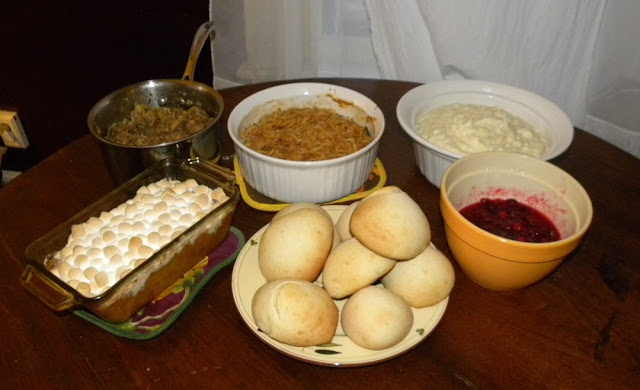 Here's dinner minus the turkey, since I just didn't quite have the energy to carry the turkey all the way into the dining room simply for a photo... and I also realized that putting the turkey on the table would put it within Mae's "let's throw everything I can get to on the ground" reach. 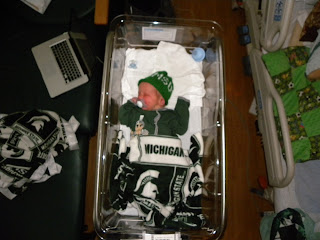 Actually, Patrick is downstairs in his bassinet sound asleep while Daddy watches football.  Which means that when I finish this post I will be going to sleep by myself until Patrick wakes up and is hungry (or until the game is over, which should be several solid hours away).

This, combined with Paul's earlier admission that he's enjoying watching Doctor Who with me, makes this evening pretty great... making up for the incredibly long day that preceded dinner time.

The girls and I all started coughing again yesterday.  I'm having a rather difficult time accepting that it looks like we're all sick again... or still sick.  I mean really... how long can this last?

On another note, if my blogging has suffered these past two months I think I can blame the fact that my oxygen level at the hospital when I was there last was solidly below 94 every time they took it.  And right now I'm just thankful for my inhaler.  This cold is insane.

We are so ready to be better for at least a solid month!

It snowed all afternoon here, with varying amounts coming down, without ever really sticking (at one point things started to turn white but then it melted very quickly).  It was quite a change from yesterday when the 6 o'clock news said that the current temperature was 64 degrees.

Sadie was ready to head out in her princess dress and bare feet to play in the snow... but after poking her head outside while I was getting the mail she came back in demanding hot chocolate.

In case you missed it, the sale in my store is still on.  And I'm still posting new items as I make them and photograph them (like this one!): 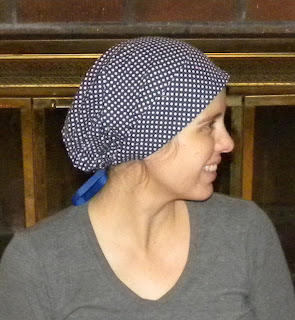 Now to get some sleep!  Hopefully Patrick will snooze through the game Paul's watching!