The discovery of the morning was that facebook as an "other" folder in the message section that has apparently been receiving email messages from people, mainly from the blogging world, that I never saw!  So if you emailed me on facebook and we weren't already friends there's a good chance that I just got the email this morning.  Sigh.  Sorry about that!

Is anyone else slightly shocked that tomorrow is Thanksgiving?  I feel like the entire month of October disappeared (it could be those 10 days in the hospital over the past month).  Today we'll be treking back over to the store to get all the things that I forgot when we were rushing out of the store to get to Patrick's first doctor's appointment.  And that is actually a post-worthy subject:

On Monday we took Patrick to his first doctor's appointment.  I had kind of begged to get in at this practice, which like my OB is associated with Paul's school, since they were the doctors who we saw in the hospital.  Apparently they usually don't take families whose older children are being seen somewhere else, and while the girls haven't been seen somewhere else since we moved here, this practice doesn't have room for all three and so that counts as "somewhere else."  But I did get Patrick in, with hopes that the girls might get in sometime after February.

I arrived at the appointment with Patrick sound asleep in his Moby wrap.  I covered him up and tried to feed him in the waiting room, since he had insisted he was ravenous in the car on the way over, but the happy warmth of the wrap had him too sleepy to wake up to eat and so I finally slipped him back into the wrap while we waited for our turn. 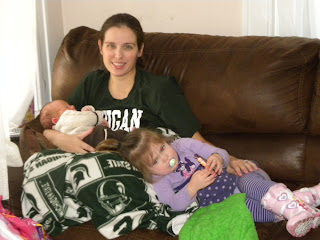 When our turn came we discovered that Patrick had already had quite the little growth spurt.  At 11 days old he was weighing in at 9 lbs 10 oz (he was 8 lbs 12 oz when he was born, he dropped to 8 lbs 4 oz on the second day, but was nearly back up to his birth weight on day 3).  We weighed him twice since the nurse wondered if there was something wrong with the scale, but the numbers went right back up to 9 lbs 10 oz a second time.  His not so little head measured in at 14 3/4 inches, which was 1/2 an inch more than the measurement taken when he was born.  He's certainly growing and filling out!

After more time in the Moby wrap, calming down after protesting about having to be undressed for the measurements, a medical student came in and did an exam, followed by the doctor who checked him again and went over the medical students chart.

Then a rather funny conversation followed in which the doctor talked with me about how tired I must be and about how if I felt depressed help was available.  There was something about three hours of sleep being pretty good at this point and I laughed and assured him that Patrick's a pretty easy baby and that I've been getting plenty of sleep (certainly more than I was in the months before he was born when I couldn't breathe!).  Later in the appointment it came up again and I repeated that he's an easy baby and the doctor looked surprised and finally said that he really doesn't hear that often at all.

I was kind of surprised that the statement that he was an "easy baby" seemed so shocking as to be almost unbelievable.  I did get the impression that he wasn't sure that I wasn't just putting on a brave face, which definitely isn't the case because when I'm sleep deprived I'm not very good at hiding it!  I am glad that they definitely seem to be on the lookout for postpartum depression and are encouraging about getting help however! 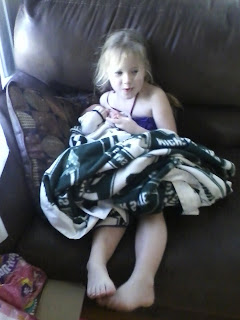 The conversation does have me wondering if Patrick's easiness is just part of his nature or if it was the result of having an increasing idea of how to care for a newborn each time we go through this whole newborn phase.  My guess is that it's 90% Patrick's personality and 5% me not stressing because we have some idea of what to expect (because Mae was pretty easy, but I still stressed about her relaxed personality and wondered if it meant something was wrong and fretted over why she wasn't eating more frequently!).  The other 5% could be attributed to the fact that I now own a Moby wrap and know that if I put him in said wrap he's pretty much quiet and happy as long as he's in there (maybe that 5% is shared with the swaddle wraps too, which keep him quietly happy at night!).

At this point we've already had one very easy baby and one very fussy refluxy baby.  I think Patrick actually falls somewhere in the middle between the two (he has Sadie's super sensitive skin and I'm watching him because he seems to have a fussy tummy too), although he's certainly more towards the "easy baby" side of the scale.  I wonder if that means he's going to grow into a wild and crazy toddler like our other "easy" newborn has?

Now to go get ready to go finish the shopping and get the kitchen back into cooking shape today...  Patrick may be an easy baby, but the house is definitely showing that there's a new baby in the house and there's work to be done before tomorrow!  Paul's been an awesome help, but I'm impatient to be back up and about like I was before this last surgery (although I know being back to normal is still quite a ways off...).  Today will be a day of balancing "taking it easy" with "getting things done!"

I hope you all have a Happy Thanksgiving!
Posted by Cammie Diane at 8:26 AM