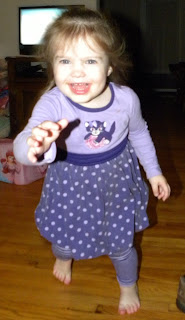 Mae Bae has these days that you really have to see to believe.  They're the days when she wakes up and thinks "what can I break today" and then goes around testing whatever theory she came up with upon waking, by pretty much terrorizing the entire house.  She'll jump up and dance on the table.  She'll climb the five foot brick mantle (by way of the window sill, which sadly, I can't get rid of).  And now she's learned that she can move any piece of furniture that isn't bolted down because of the smoothness of the hardwood floors.  She moved the couch and a big heavy bench/chest.

Pieces of furniture and the items that sit on them are moving, in a steady line, down into our basement.  That's what happens when I just can't imagine putting the same bookshelf back together for the fifth time in one day.

I am quite ready for the "what can I destroy" phase to come to an end.  However I suspect it will last for quite a while longer...

Did anyone else read this yesterday?


Earlier this month, an un-named doctor wrote of the agony of watching the protracted deaths of babies. The doctor described one case of a baby born with ‘a lengthy list of unexpected congenital anomalies’, whose parents agreed to put it on the pathway.

‘Their wishes, however, are not consistent with my experience. Survival is often much longer than most physicians think; reflecting on my previous patients, the median time from withdrawal of hydration to death was ten days.

‘Parents and care teams are unprepared for the sometimes severe changes that they will witness in the child’s physical appearance as severe dehydration ensues.

‘I know, as they cannot, the unique horror of witnessing a child become smaller and shrunken, as the only route out of a life that has become excruciating to the patient or to the parents who love their baby.’

According to the BMJ article, the doctor involved had presided over ten such deaths in just one hospital neonatal unit.

In a response to the article, Dr Laura de Rooy, a consultant neonatologist at St George’s Hospital NHS Trust in London writing on the BMJ website, said: ‘It is a huge supposition to think they do not feel hunger or thirst.’ 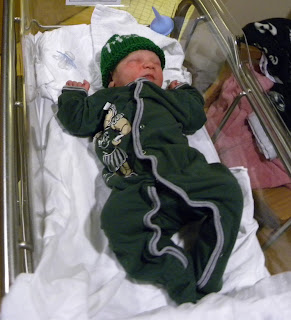 I know that there are many people who would like to pretend that the devaluation of all life that comes when you take some lives for granted does not exist.  However as we see that devaluation of life steadily expanded it's hard not to see the slippery slope that our culture is heading down at an alarming pace.

And I seriously wonder when they believe that a baby starts to "feel hunger or thirst."

Because having only recently welcomed a little life into the world the memory is exceptionally clear of just how hungry our little one was when he made his arrival.

They just seem to keep expanding the "oh well... they can't feel anything" illogic to kill the most defenseless among us... those that have been deemed unworthy of a shot at life...

Today we are going to Home Depot to get a space heater.  That way we can heat the living room and let the rest of the house get icy cold.  That's my plan for the winter at least.

I wrote about this a bit on the blog facebook page but I'm still kind of in disbelief that in our new home rather tricky salesmen from the gas company go door to door and try to trick you into changing companies.

The whole situation was highly uncomfortable, with the man claiming that we weren't changing companies, we were just locking in our rate, while trying to get me to sign this paper that would "just save me money."  And all of this went on while I tried to wrangle Mae and could hear Patrick stirring in his bassinet.

I tried to use the "listen my husband's in law school and really likes to read any contract that we sign" excuse along with "besides his name is the one on the bill" but the salesman just wouldn't take no for an answer for the first half hour of the time he spent after getting in the door by basically acting like he was from some sort of non-profit gas price reducing program.

I kept pointing out the words on the contract that said "signing this paper will change your service provider" while he denied that that's what it actually meant would happen and kept trying to get me to sign up for this "special program to save money."

And finally after a half hour of half truths about what he was actually trying to get me to sign on for, I got him out of our house and called our gas company, which nicely explained exactly what he was selling (changing to another provider with a locked in rate that wouldn't vary with gas prices).

New house policy: no one gets in the house that I don't know when Paul isn't here.  Ever.  The whole situation was so uncomfortable and intimidating... and it was a huge relief when I finally got him to leave.

Who knew that gas sales were such an aggressive door to door type sales situation?  As someone from California I certainly didn't!

Patrick is going through another growth spurt.  He was starting to look a little chubby last week, but he's back to looking kind of skinny again since he seems to have shot up suddenly.  He's so long and lanky!

I can't wait to see what he's weighing in at at our next doctor's appointment!  Since he was 9 lbs 10 oz at a week and a half I'm pretty sure we're well over 10 lbs now!  He's definitely losing his not-so-tiny newborn size quickly!

I've started letting Sadie stay up later than Mae each night.  It gives her extra time to spend with me... and more specifically with the person she really wants to spend time with: Patrick.  Last night after Mae went to bed Patrick and Sadie had tummy time on the floor together, which pretty much involves him smiling at her while she kisses him repeatedly and talks about how he's "a little bit afraid of Maggie." 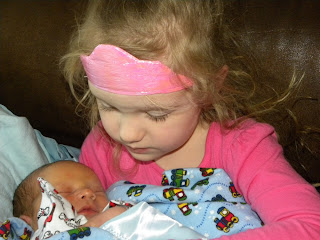 
Sadie is the nickname giver in this house.  She's the one who came up with "Mae Bae" when Maggie was an infant.  And now she's gone on to pick Patrick's new name.  Lately she's been calling him "Patrick Bear" or "Slow Poke" (the second name is the one she began calling him when he was still in my tummy since she felt that it was taking him way, way too long to be born...).  Patrick Bear seems to be the one she's favoring at the moment...