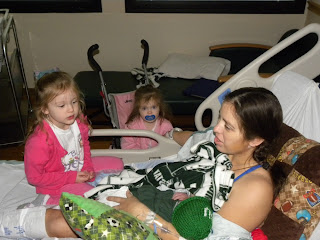 Yesterday Sadie told pretty much every single person she encountered that she had a brand new baby brother.  She told every stranger that walked past us as we waited in line at the cutting counter at the fabric store.  And she told the other kids at her early morning swim lesson class.

In the locker room, as I got her changed back into her regular clothes after spending a half hour pointing for her to hold onto the wall like her teacher had instructed her too, a little girl who was a few years older walked by and she and Sadie began to chat.

Actually Sadie began to ask her questions like "are you in swim lessons?" and chatter away with: "My name is Sadie Kathleen and I'm four!" and then finally: "and I have a brand new baby brother."

The girl politely gave Sadie one word answers, but paused when she got to the baby brother part and finally said, in a rather disgusted voice:  "I do not want a tiny new baby brother."

Sadie was wide eyed as she heard the words and replied, as I was shoving her little pink shoes on her feet, in a shocked voice:  "Are you kidding me?!?!?!" as if she'd just heard the most absurd thing in the world.

As I whisked Sadie up and hurried to get her back out of the sweltering locker room I heard the girl say: "What did she just say?!??!"

It made me very thankful that the girls are both so excited about their baby brother.  Waiting for eighteen months certainly built the excitement in our house...

Mae has been the real surprise these last few days, as she's suddenly started acting much older, as if the arrival of Patrick has propelled her into the "big girl" category and she's decided she can do quite a few things by herself (and she enjoys doing them).

Now to get ready to brave Mass for the first time with our entire little group!  Hopefully everyone behaves!
Posted by Cammie Diane at 9:23 AM