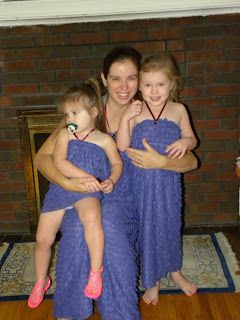 Patrick decided to attempt to regain his best baby title by going to sleep easily last night and allowing me to work.  I have to admit that our success may have had something to do with putting him down in the kitchen (in his bassinet) while I worked downstairs, with both the dishwasher and the oven fan running.  Patrick is a big fan of the oven fan (and so am I).  It keeps him from hearing the screams of the little savages (his sisters) in the other room when they're spending the day finding new and inventive ways to deconstruct the living room.

Have I mentioned that I'm ready to be given the all clear for lifting and wrestling and baby wrangling (or more specifically toddler wrangling) again?   It's been three weeks tonight and I have to admit that I really, really am.  Actually I'm fairly certain that somewhere around 20% of my daily activities would not be considered "okay" by my OB... however... when Mae throws herself at me and is hurtling through the air with a huge smile on her face, I pretty much have to catch that almost 40 lb ball of momentum rather than letting her crash to the hardwood floors.

But I'm ready for "legal" baby wrangling again, where I can lift and hold and twirl without breaking the "please don't lift anything for six weeks" rule that makes me think of unpleasant possibilities like popping a stitch or whatever else could go wrong when you've just had major abdominal surgery and you're catching a flying cannon ball of toddler who enjoys climbing as high as she can and jumping at you with a giggle. 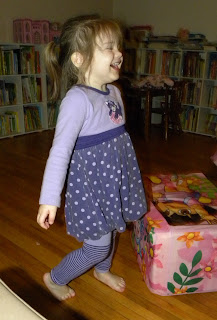 I do feel that there's a bit of unfairness (in a laughing way mostly... with the exception of when Mae tries to do something exceptionally dangerous and I begin to wish she were a teensy bit more wrangle-able) in the disproportional sizes between me and the kids when these sort of things happen.  They're gaining on me.  When Nani was here she brought out a suitcase of clothes that she'd found that were my favorite outfits when I was little.  Mae Bae easily fits into the clothes I wore from the ages of 5-6 (she'll be 2 1/2 in January).  Sadie can squeeze into the outfits that I wore in third grade now, at the ripe old age of not-quite-4-and-a-half.

So it looks as if they'll be taking after their father in terms of height.

Sadie, in a vaguely-but-not-really-all-that-relevant topic jump, has become a tad obsessed with my size, and more specifically, the size of my tummy.  As we were driving by the hospital on the way to Mass she sighed and said happily, "That's where Mary's going to be born."  She announced in the fabric line at Joann's a few weeks ago (as in, a few days after Patrick was born when there was a giant grand opening sale and I just couldn't pass up really, really inexpensive fabric for my store right before the biggest sale of the year!) that I would be having another baby soon.  And she's been eyeing my stomach suspiciously and asking if we've got another baby in their yet.  When I say "no" she varies between disappointed and doubt, as if we're just waiting a bit longer to tell her the big news. 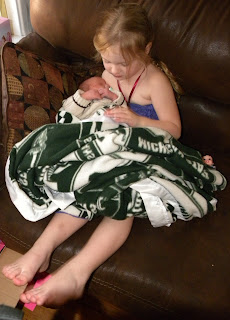 I finally showed her the tiny grey line that is the rather impressive result of all three c-sections (I can't believe how exact they were because it really just looks like one teeny little line) and explained that the doctor would really like this scar to heal and that means that we probably won't be expecting another baby to start growing for at least one year so that Mommy's tummy can get better.  Sadie reluctantly agreed at that and with an air of slight disappointment said that my tummy looked "little and not big" which I guess backed up my claim of not being pregnant again.

Naturally through nursing, our babies have had a tendency to be about two years apart and so, I think it's pretty likely that she has quite the wait until there's even a possibility of being blessed with another brother or sister.

In any case, her baby craziness has not subsided.  As she says things like: "I have to kiss Patrick Mommy, because I love him so much!" or "I have to hold his hand Mommy, because I love him so much!" (this is the standard response to, "Please leave your brother alone for a few minutes!  He just went to sleep!") she's already dreaming of another car seat being added to the van.

Maybe she thinks that if we had another one, my arms would finally be too full and she'd get to hold one of the babies all the time.  That really seems to be what she's going for as she lobbies to hold Patrick 24/7.  And let's face it, Mae is just too wiggly and has too many opinions on being kissed or dressed up to fit the bill.
Posted by Cammie Diane at 9:12 AM