After another five nights in the hospital, it feels so strange to finally be home.  Today Nani and Grumpa head back to California and Paul goes back to his all day every day law school schedule, and I'll admit it's a tiny bit intimidating.  At the moment I feel like not leaving the house until... Christmas... although I know that with time that will pass.

We seem to have been blessed with the most laid back baby in the world right now.  We brought him home and the girls instantly surrounded him and began squealing and cooing.  He slept through it.  Grumpa repaired a small hole in the corner of our living room with a drill.  Patrick didn't bat an eye.  The girls repeatedly kissed him (Mae with a binkie in her mouth).  Patrick didn't stir.  All those months in the womb with his sisters shouting at my tummy so that he could hear them better have apparently made for a very good sleeper (since they did take him and do a hearing test at the hospital).

Sadie's most frequently used phrase is:  "I need to kiss my brother.  I just love him so much."  And she finally got to sit on the couch and hold him (and did a surprisingly good job of it!  She held him for about five minutes!).

The only thing I'm really dreading right now is not being able to pick up Mae for another six weeks...

Hopefully I'll have more time later.  I hear someone calling for food at the moment!  And he's hungry now! 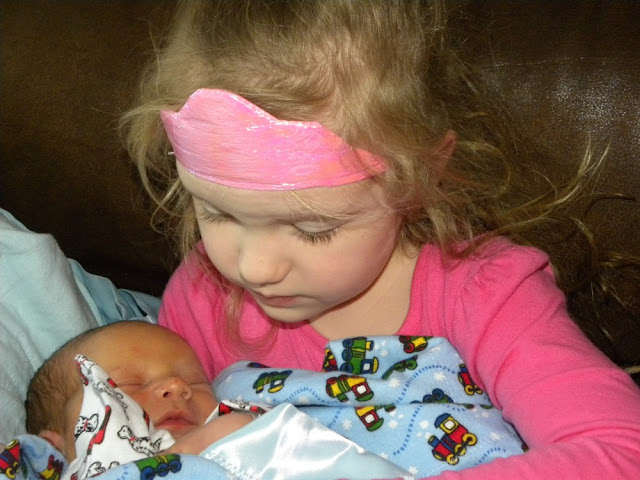