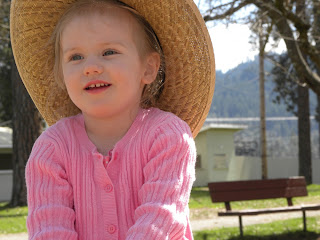 So we're sitting on the couch watching episode 4 of Walking with Dinosaurs, one in a series of documentaries that Sadie absolutely loves, despite the fact that it involves someone getting eaten every five minutes.  She has watched Walking with Monsters (which comes before Walking with Dinosaurs chronologically) twice now and is begging to watch it again.  And Maggie?  Maggie's started cruising the house while roaring and making other baby dinosaur-esque sounds.

Patrick is blessedly sleeping in his bassinet in the kitchen, unaware of the baby t-rex marauding in the dining room, toppling books off of bookshelves and dancing jigs on top of the 19th century dining room table that's survived five generations in my family and will hopefully survive the sixth (despite all the dinosaur stomping going on).  And me?  I've given up on getting anything done before bedtime.  I have surrendered to the fact that the house will be a mess until they go upstairs for the night. 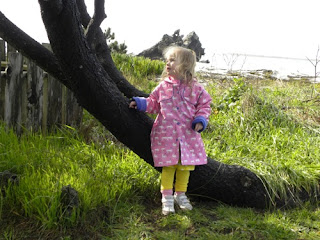 I would rather be outside walking or playing or doing something other than not getting out of my pajamas all day long  (it's become increasingly difficult to separate myself from my flannel PJs when it's just so cold all the time!).  But I've come to the conclusion that it would be utter insanity to leave the house without Paul with my little caravan of three before I'm cleared to wrangle Mae (much less carry Patrick while wrangling Mae and convincing Sadie not to dart into traffic and that I'm serious when I say stay. right. next. to. me.).  Which basically means that we're stuck inside until the 20th, at least on Monday through Thursday when Paul has class all day.  And I really need to go down to the basement sometime soon and search for clothes that actually fit!

At least I tell myself I'd rather be up and about.  But maybe that's just because I'm feeling a wee bit guilty about staying inside watching dinosaur documentaries when the world outside looks so sparkly and bright (and cold... icy, icy cold...).  Still, that's just not a good idea... yet, at least.

I do think that it's becoming clear that the dinosaur documentaries are influencing our little carnivore.  I had this conversation today while looking at a book about rocks and minerals that Sadie had insisted we read (dinosaurs, volcanoes, rocks, minerals and princesses... those are her interests at the moment):

Sadie: (pointing to a picture of stone arrow heads) "What are those?"
Me:  "Those are arrow heads.  People used to use them to hunt animals for meat to eat."
Sadie:  (after a moments silence)  "I want to hunt a cow to eat."
Me:  "People don't really hunt cows anymore."
Sadie:  "Why not?"
Me:  "Because they raise cows.  They have fences and they feed them... and when they're big enough they eat them, or sell them for food.  Then people in the stores can buy them.  Like we do."
Sadie:  "Oh."
Me:  (for some reason offering more information... maybe because hunting season has been on the local news a lot lately):  "These days people usually hunt things like deer."
Sadie:  "Oh...  Oh I want to hunt a deer!  I want to hunt a deer to eat!  Do you think that Daddy and Grumpa can take me hunting to kill a deer to eat?"
Me:  "I have a feeling Nani would put her foot down on that one.  I do not think she would let Grumpa take you hunting for a deer to eat." 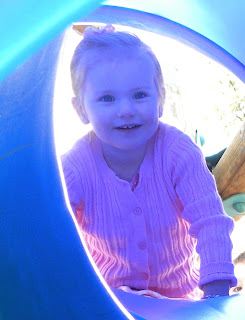 Sadie proceeded to spend the afternoon pretending to hunt in our living room and then served her stuffed animals on a table in the middle of the living room.  She "hunted" her stuffed lamb first.  And then she hunted Mae's pop up toy, with a lion, giraffe, panda bear, monkey and elephant.  After that she added two dogs to the table, despite a conversation about "pets" not being food, followed by the "hunting"of a horse, an alligator and a bear in a pink t-shirt.

Did I mention that I was a vegetarian for a decade after an incident involving a live turtle in a pot in Chinatown when I was ten?  I don't think Sadie will follow in those footsteps anytime soon.

Anyways, I had to break it to our little carnivore that it's unlikely anyone in our family will take her hunting (since we don't really have any hunters).  She wasn't discouraged.  She jumped onto her play horse and waved goodbye as she announced that she was going out to hunt for food.

The upside is that she'll try pretty much anything if you tell her what it is.  She ate half of a plate of clams when Nani and Grumpa were here and loves squid...  Still... she definitely didn't get the adventurous four year old gene from me!
Posted by Cammie Diane at 5:02 PM