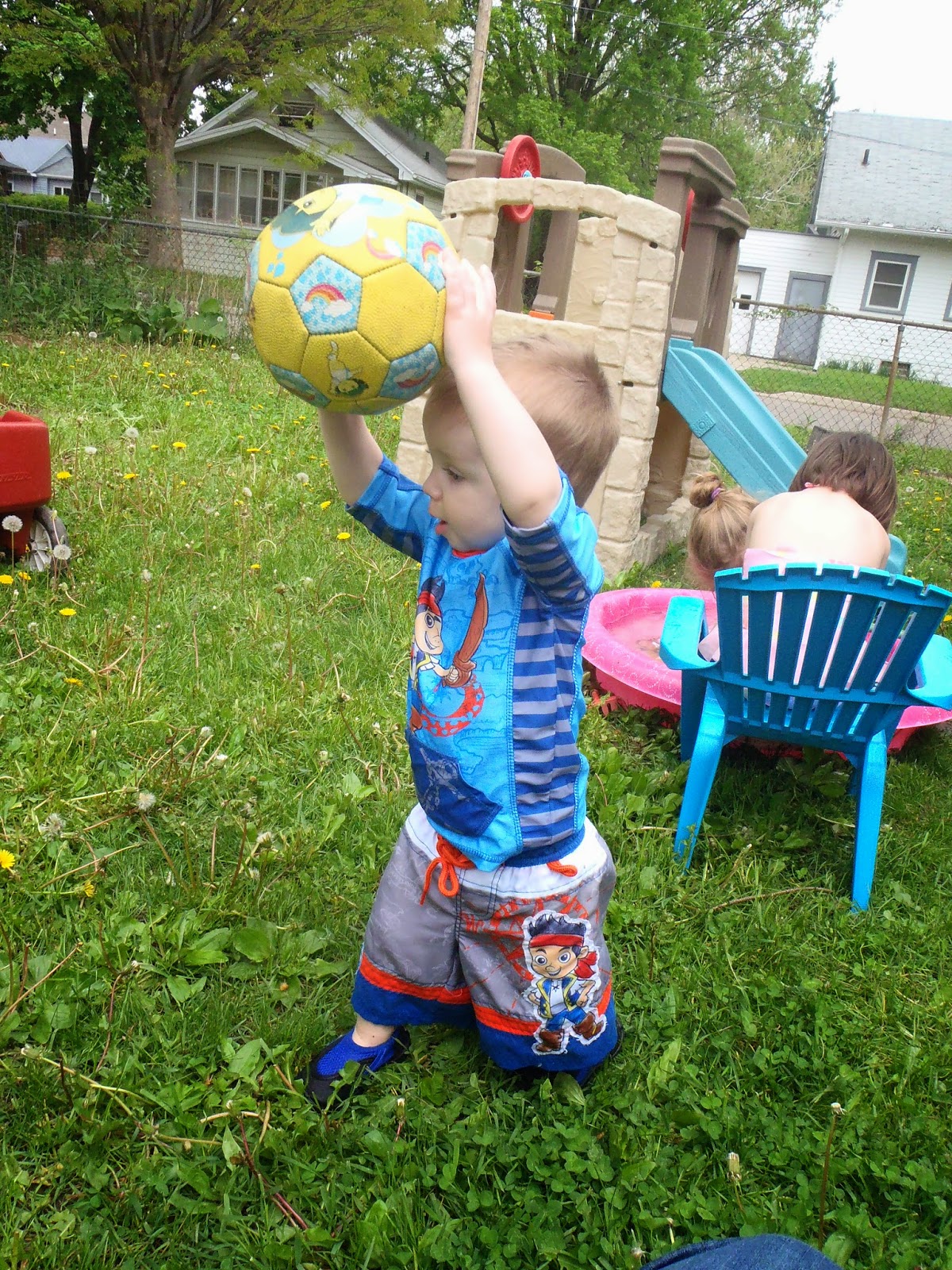 Patch has reached the phase where he imitates anything that catches his eye... and apparently almost everything that he finds worthy of imitating, is anything that Paul happens to be doing at the moment.

Yesterday I posted on the blog facebook page about how he attempted to mimic Paul walking across the room by puffing up his chest and shoulders and trying to take big strides across the room (which meant he ended up walking straight legged in an effort to take steps as big as Daddy's steps).

Today I was walking along, holding his hand while we were out doing errands, when we came to two glass double doors.  Paul opened the door for us while holding Maggie, but he had to go through the door for our entire group to fit through... and that's when Patrick sprang into action.  He stuck his little arm out and pushed the door and wouldn't budge until I went through it... which was a little awkward because I knew he couldn't keep the door open by himself, but he wouldn't budge until I walked through (and I couldn't keep holding the door open while holding his hand and walking through in front of him).  So finally I walked through, and he hurried through before the door closed on him and then insisted on holding open the next door until I went through and then repeated his little speed walk/run before the door closed on him.

It's so amazing (and funny) to see him trying his 18-month old best to be just like Daddy all the time right now!

When we're out walking there's actually one thing that Patrick likes better than holding my hand... it's holding his biggest sister's hand.

In other Patch news he climbed up to the top of a very, very high slide while we were at the park the other day (with Paul behind him, since he's not that steady of a climber yet!) and went down the twisty slide by himself.  I was at the bottom of the slide and just about had a heart attack.

So far I've been keeping track and Paul is averaging 14-16 hours a day of studying... every day.

I'm not sure how he survives on this little sleep.

Is it August yet?

Although at the moment it's settled on one particular color... she consistently loves pink with polka dots, preferably with a bit of tulle and sparkle too... 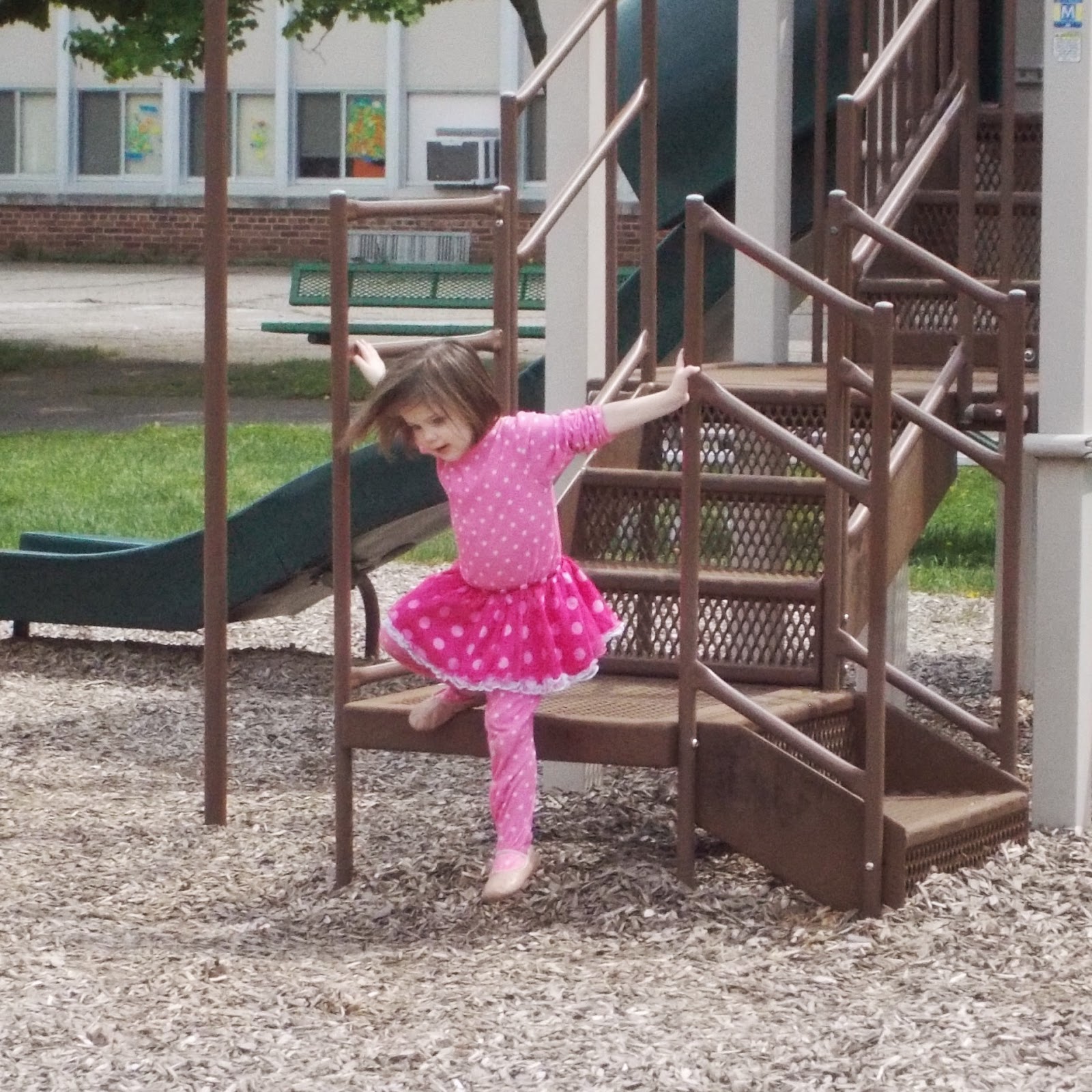 And ballet slippers (not ballet flats), indoors or outdoors, all the time.

Sadie has told every therapist that has walked through our door this past week that this week is "chicken mummy week."  So after a couple of weeks spent pouring over all things ancient Egypt I went into the store today and bought rubbing alcohol, gloves, baking soda, baking powder, huge amounts of salt and large freezer bags.

Tomorrow the chicken mummification process is set to begin.

This ought to be... interesting...

I had to share my favorite sale of the week for anyone looking for little boy shoes.

I have been stumped while searching for shoes for Patch.  I won't pay $20 for a pair of shoes from Payless that he's going to outgrow in five minutes... and toddler boy shoes seem to be ridiculously priced.  I've been lamenting being able to find $7 Dora sneakers for Mae that last forever, while all the little boy shoes are almost three times that much while being half the size.

Today, however, I ran into Payless because Sadie desperately needed sandals for her rapidly growing feet and I'd heard there was a 50% off sale, but what I found was a jackpot of little boy shoes for $5-$7.  Patch now has Elmo shoes, Jake and the Neverland Pirate sandals and some plain blue sandals (in two sizes) that should at least get us through the summer.

So if you're looking for little boy shoes but think they're usually way to expensive, this might be the weekend to stop by and take a look!

Here's an outtake from this weeks week-by-week "photo shoot" (aka me trying to get a selfie with my computer in roughly the same stance I was in the week before). 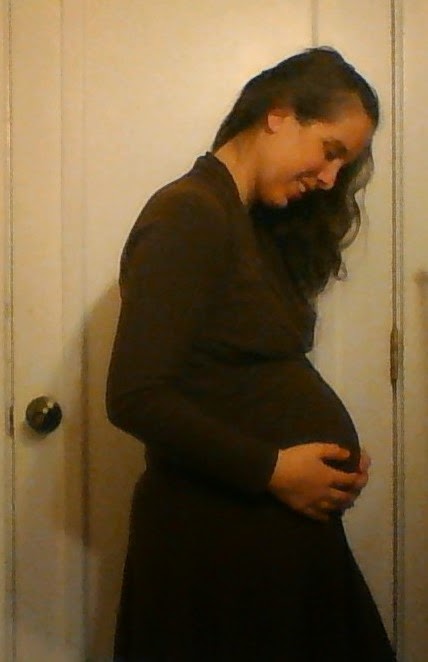