The Secret Castle: A tent that can withstand Mae's antics...

On Friday I mentioned that two bed tents arrived from Nani and Grumpa.  Tonight I finally found my camera (who would have guessed that it was in a bag full of snoods?) and managed to upload the pictures that I snapped when Mae and Sadie first saw the new set up.

So far we're on night four and Mae has not yet destroyed the tent.  It looks exactly like it did when we bought it, which despite the reviews that said that it was really tough, still somewhat surprises me.  Especially since she's been extra destructive (as in slightly purposefully instead of accidentally) since she's had the ear infection and fever, which thankfully seems significantly improved today.

The door monkey (our new lock) has been slightly less successful.  On the upside, she has not yet broken it.  On the downside, I woke up a few mornings ago and it was no longer on her door.  The door was completely closed with no lock in sight.  I opened the door and looked in and she came over and closed it again.  I was baffled.  I finally went in and found the little plastic door lock hidden under a pile of toys.  Later I put it on the door and test it out.  I tried to pull on the door and close the door and it wouldn't budge.  I decided to give it one more try that night.

We've used it for the last few nights and it's worked just fine.

Yesterday at Mae's OT appointment I told them what had happened and they asked if there was any way she could have climbed anything to get to the lock.  I thought for a while and finally concluded that there was only one way that it could have happened.  Here is my theory.

When I installed the lock I reached up towards the top of the door and put it a ways above my own head.  There's no way Mae could have reached it from her bed, which is bolted to the floor.  However, if she held on to the door (which is open an inch with the door monkey) and put her foot on the door knob and then used the door edge to pull herself into a standing position on top of the door knob and then, while hanging on with one hand, reached her other hand up, she probably would have been able to grab onto the door monkey and pull it down.

So... there's that.  And then after she proved that she could take down the new lock, she closed the door and stayed in her room.  I guess she'd made her point. 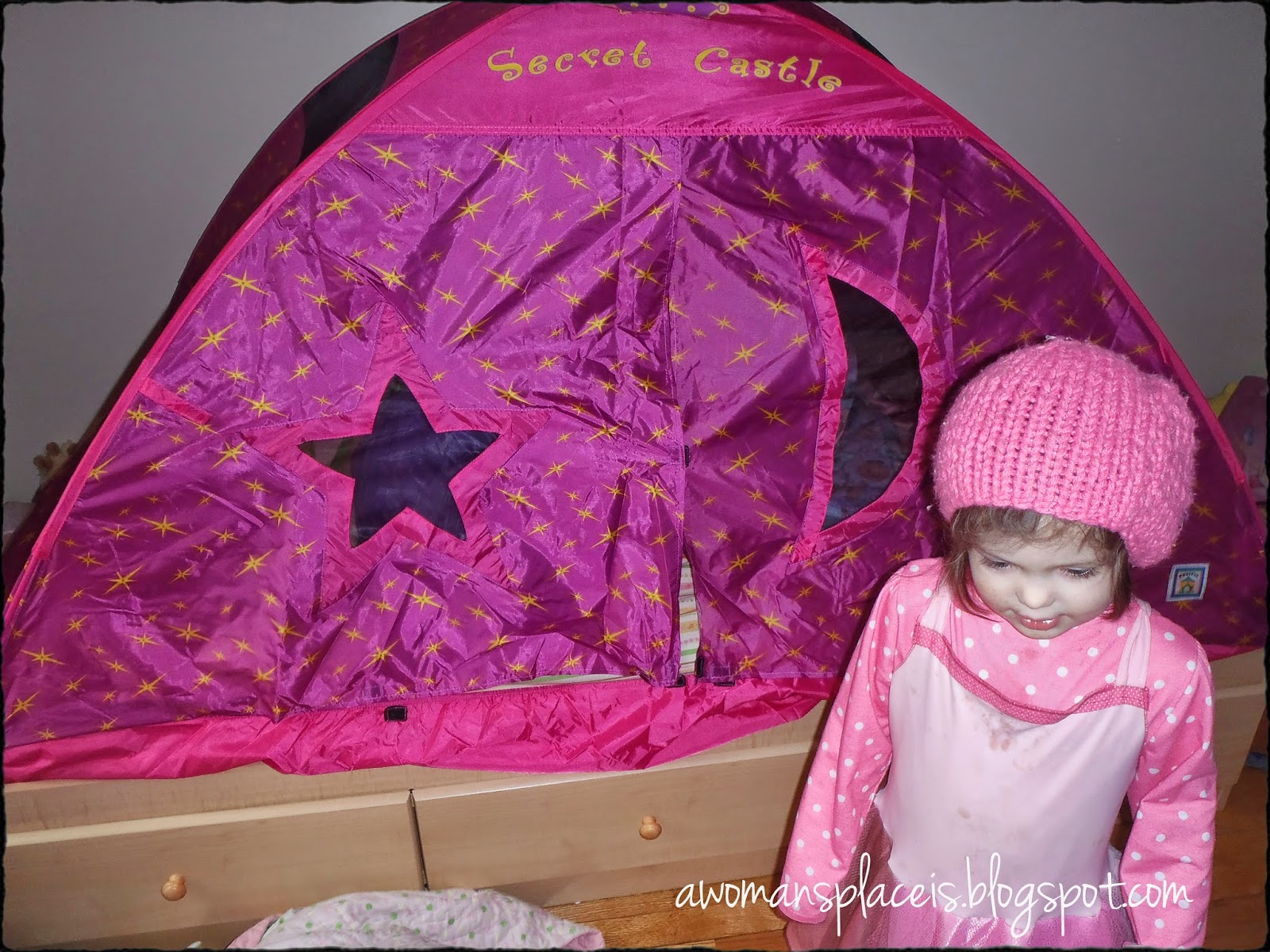 Last night she woke up at 10 pm and I heard a giggle.  And then the I heard the tent rustle, followed by more giggling.  This went on for about two hours while I had thoughts like:  "Did she pocket the melatonin I gave her?  I should have watched her take it.  I handed it to her while Patch was crying after his finger got smashed and I was trying to get back over to him and so I didn't see her take it... She always takes it quickly... but did she not tonight?"

After two hours she was quiet and I wondered what the state of the tent would be in the morning.

Amazingly it looked exactly like it did when I tucked her into it.

So I can strongly recommend Pacific Play Tents... because a tent that can survive Mae should be able to survive just about any kid.

I'm filing this under product review since it tells about our experience with these tents, even though I got a little sidetracked by the monkey lock halfway through.  Nobody asked me to review these, I just thought I would in case any parent with a child who can destroy just about anything was wondering if there was a tough ten out there that might be strong enough to last more than a day!
Posted by Cammie Diane at 9:02 PM