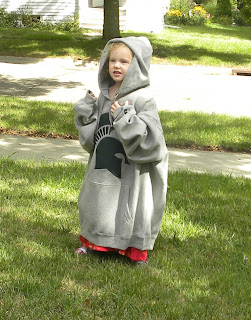 I had to go upstairs last night because Paul's conversation with yet another representative at comcast was just stressing me out way, way too much.  It wasn't that anyone was impolite (okay, there was the one lady from the Florida branch that was a little out of line when she basically accused us of stealing the cable box, as Paul explained that we hadn't thought to bring it back since were still with comcast and no one had mentioned it... we are now sending the Florida box back and picked up a Michigan box...) it was the watching him be transferred and put on hold for extended periods of time, with each new person saying: "Oh, that's not me!  Let me transfer you!" over and over again.

The fact that six of the eight TV boxes that we were given were defective was also a teensy bit annoying since you have to wait in line for roughly an hour to get a new one.

Of course pregnancy, as you may have noticed lately, is a time when I struggle with whininess and impatience...

But it works now.  And I amazed at Paul's level of patience when dealing with these things.  Just listening to the 12 plus rounds of "oh that's not me" was making me shake my head.  It only took two days to get it all worked out.

And now he can watch his MSU games. 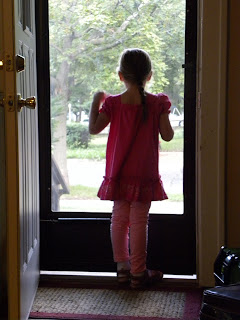 It's amazing how quickly we've gotten used to the new climate.  Two weeks ago a high of 80-something would have sounded heavenly.

Yesterday I saw that forecast pop up on my screen and thought:  "Oh no!  That's too hot!  It's been so nice in the seventies!  We haven't turned on our heater or air conditioner since we got here!"

It's those leafy trees that look like they're just beginning to think about turning colors.  It has me longing  for autumn!  And sweaters!  And a reason to knit snuggly warm pieces of clothing that will actually be worn instead of relegated to some box since tropical weather and knits don't generally go hand in hand, even if you'd really like them to.

On a different note, it's really difficult to think about turning on the oven when it's over 76 in the house, because I know it will instantly raise the temperature several degrees!  It brings a new understanding of the phrase: "slaving over a hot stove!" 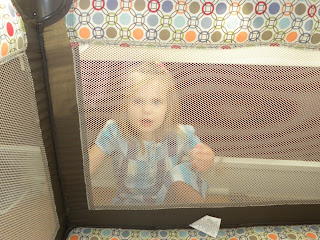 I've watched Mae Bae hide things before that she knows that she isn't supposed to have.

Yesterday I watched her walk across the room and retrieve Paul's cell phone from the place where she'd hidden it in a chair (at least her quick locating of it, after we Paul for four days, leads me to believe she had something to do with it's placement there).

Then she walked around the room saying:  "What?" into the phone over and over again in a loud voice.

Toy phones just aren't as much fun as the real thing... 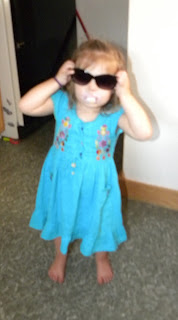 Sadie is in love with school.  When I suggest that she seems to be getting tired and that we finish up for the day she is instantly reenergized and begs to do more...  I'm going to have to start planning for longer lessons!

When we drove past Hobby Lobby yesterday Paul said:  "Doesn't it kind of make you sad... driving by without going in?"

Be warned husband: comments like that could lead to a browsing trip of Hobby Lobby.  And while you may like Hobby Lobby better than the other craft stores we visit, I'm not sure how well you'd handle a totally purposeless trip into that giant store. 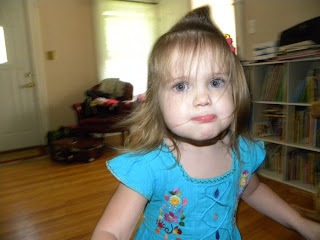 I can't believe summer is really over and we've given Paul up to the hectic law school schedule for another year.

At the same time I'm still in awe at how quickly (and yet hectically) the first year went by.  I have a feeling that the next two years are going to follow in the same way...

Now to finish the last few things on my "moving to Michigan" checklist.  Like finding an OB.  And setting up an appointment when I hopefully won't be on my own with both girls.

Here's to one last busy day getting things done while Paul's still here!

For more Quick Takes, visit Conversion Diary!
Posted by Cammie Diane at 9:15 AM