We're here!  At the last minute everything fell into place, with the movers calling and meeting us at the house just as the last coat of paint dried on the walls.  The girls were awesome during Saturday with a 14 hour drive, reading books in the backseat, while Sadie asked a ton of questions about the various states we were driving through.

We spent an hour stopped on the freeway in Tennessee for an accident and it's subsequent cleanup and another hour in Lexington for a truck that I pray that everyone got out of alive (it was totally charred when we went by) making Saturday the longest day in the history of driving (for me and the girls, although not for Paul).

Sadie announced that she wanted to be an Olympic runner (wearing green and yellow, she said), and then later a giant blue whale, and worried aloud as we drove through Tennessee about bears, while peering into the kudzu filled forest where we were stopped.

Sadie announced that she wanted to live in Kentucky, and then that she would like us to pretend that Kentucky was in Michigan (it helped that we were stopped for that hour next to a beautiful horse farm), and that the farm was named Ducky Pond and that we were going to live there.

There was an incident in Bowling Green where we stopped for the night at the scariest motel on our entire route, after an incident that involved me, some confusion about which way to turn, entering into a lane with oncoming traffic while trying to avoid doing just that, and a likely APB that would have probably gone out if I wasn't so clearly a lost and confused mom with a van packed full of princess dresses (there was a cop standing on the sidewalk watching the entire incident...).

Then we were here, safe and sound in our new home state, with Sadie declaring that she wanted to live here for a very long time (she added "at least until I'm five") and both girls enjoying our new big (for us) backyard immensely.

And I am enjoying sitting in the living room with the windows open, watching the breeze move the curtains, and not waking up with gigantic, poofed out humidified hair Every Single Morning, which was my fate in Florida (along with being sticky and sweaty all the time).  So here we are at the start of our latest adventure!  Now to get the kitchen up and running so we can finally eat something that's homemade! 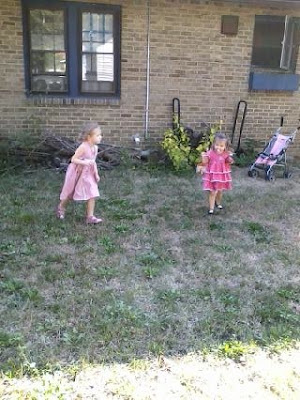 Email ThisBlogThis!Share to TwitterShare to FacebookShare to Pinterest
Labels: The Move, The Trip