Our Last Night in Naples: One More Trip to the ER

As I lay next to Sadie in the ER this evening it seemed somehow appropriate to be back there, spending our last night in Naples in the hospital, just as we'd spent our first day there.  And even now I'm still baffled at exactly how we got there:

Today felt like it was wrapping up.  We'd dropped Paul off at the U-haul office and the girls and I had headed home ahead of him in the van.  On the way back Sadie had me chuckling as she announced:

"Oh," I responded, knowing the answer to my next question.  "Are you going to take a nap when we get home?" 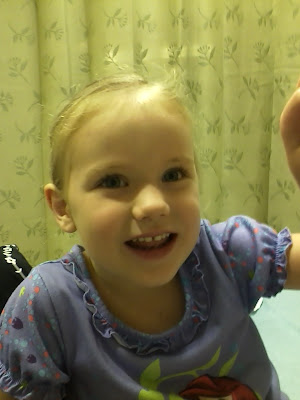 When we got home she lay down and asked for a glass of water.  I got it for her and she drank half and then handed it back to me.  After a few moment she hoped up and began to ride her Radio Flyer horse, Maximus.  And that's when she reached down and itched at her leg.

I wasn't worried yet.  I had her get off the horse to look at it and quickly saw that the welt (giant hives really) was just one in a large patch of welts that, within a matter of minutes completely covered her legs and the portion of her torso below her ribs, and were making there way up her back over her shoulders and down her arms.  One was roughly ten inches in diameter and took up her entire lower back.

As they rapidly spread and expanded I ran her to the bathroom and put her in the bathtub, filling it with lukewarm water and hoping that, it something had touched her skin, rinsing it off would somehow help.    Washing with baby soap didn't seem to help and as Paul walked in the door we quickly agreed that this was beyond our scope and that we needed to head to the hospital.

Five minutes later we were in the ER lobby and as we sat in triage we watched the welts begin to disappear as rapidly as they had appeared.  They took us back to a bed and the nurse came and looked at the remaining hives (which actually looked like hives now).  By the time the PA came in they were almost completely gone.  Sadie happily chatted with everyone as her "ouchies" disappeared, describing in detail what had happened and repeating over and over again that she really, really hoped they didn't come back (and panicking each time a new one appeared). 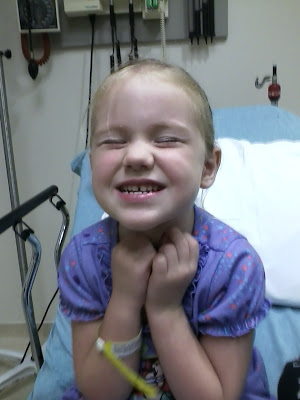 However when the swelling from the hives went down it was nearly as bad as the hives themselves, because the few minutes of scratching that Sadie had snuck in had done quite a bit of damage, so it was obvious exactly where every single hive had been.

After a dose of allergy medicine we watched as the hives appeared and disappeared, and left with instructions to see a doctor as soon as we get to Michigan, who will hopefully be able to identify whatever triggered the incident.  I'm also supposed to carry her new prescription with us, since we don't know if it will happen again or what caused it.

I do know that I used almonds today in the cookies I baked (I usually use pecans) and we're really, desperately hoping that they have nothing to do with her allergy.

After two hours in the ER we were discharged (with Sadie rather loopily stumbling around on her medication) and Sadie announced that there was only one thing that she wanted to eat.  Chicken.  And a peach shake.  You can probably guess where we waited in the drive through line for dinner (while watching an impressive lightening display).

And that was the end of what is hopefully our last full day in Naples.  Barring any disasters...
Posted by Cammie Diane at 9:16 PM