We ended up rearranging the living room today.  Already.  Let's just say that it involved a cable cord connection and Paul's realization that season football tickets were not in his future, which resulted in some sort of near certainty that he would not survive football season if we didn't buy cable so that he could watch the games on the weekends (I took it as a hint when the x-finity ad with a special on the sports package appeared on my nice neat kitchen counter).

So we have cable again.  Kind of.  But that's another story that involves Paul being on hold for a very long time, being transferred to about a dozen people who had no idea what was going on and kept saying "Oh, you've got the wrong person!  I don't know how you got transferred here!" before transferring him to another "wrong person" and then a lecture from a loud woman who seemed certain that we'd stolen our tv box because it had come with us when we moved since we were still using Comcast (When we called to disconnect it was never mentioned and the people in the multiple other states we talked to all seemed to think we were supposed to bring it along too since we still had Comcast!  We weren't the only ones confused!), and then finally our TV almost working until I realized that it was only the dozen public access channels that we apparently have here.  But I digress.  This post is not about the time consuming task of ordering cable (we'll have to see if Paul's $4 sports package is worth all this trouble!).

This post is about rearranging the furniture, which, let me say, I was none too excited about.  I mean, I've been unpacking for ten days now and the house is not yet finished.  Things are starting to come together, but the master bedroom is still in ruins.  So deconstructing a recently finished room was not high on the list of things that I wanted to do.

We moved three bookshelves and the tv and the couch.  I banished one table to the basement.  The rocking chair moved into a corner of the dining room (mostly because the girls insist on riding it like it's a rocking horse).  And I have to say, I'm happy with the results.

I'm especially excited, however, about this one corner of the room.  I decided, after moving the first bookshelf, to move two more out of the dining room to make a reading corner.  Then I had Paul bring down the little table and voila! a little school area.

Of course I'm now two exhausted to move... but I love how it turned out.  Probably because I love looking at rows of books! 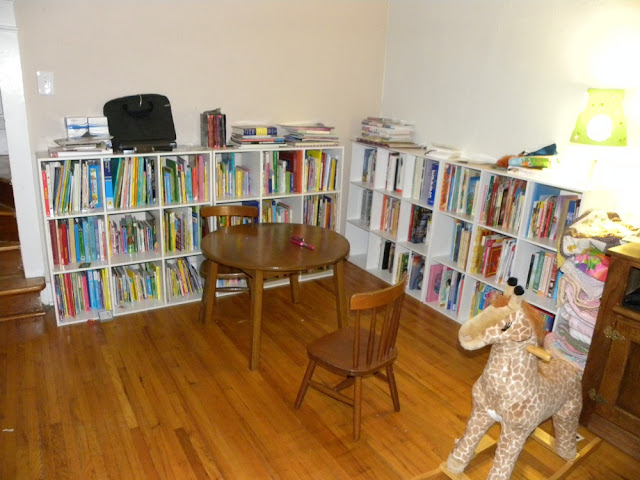