People are Strange: On Headcoverings and Skirts 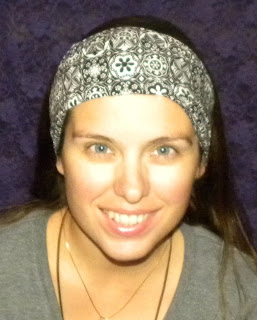 I was in a pretty good mood when I went to Joann's this weekend with a 60% off one cut of fabric coupon.  I was in an even better mood when I made it to the front counter with only on cut of fabric.  Usually I get sucked in and end up with a full cart.  This time I went straight to the silk section, grabbed  a bolt, had four yards of the chocolate colored silk that I can't keep in stock in my store cut, and headed to the front counter to stand in a long line, coupon in hand.  But I'd made it.  I even bypassed the candy section that I had to stand next to and didn't buy a single piece of candy.

Then I reached the front counter and a grumbly looking checker who had been loudly complaining about her break.  I smiled and tried to be extra nice.  And then:

Checker:  "So, what are you making?"
Me (still cheerful):  "Headcoverings."  And then, at the look that followed, feeling the need to clarify more fully.  "Snoods," I made a little circular motion around my head as I said the words.
Checker:  "Oh!  I would never, never wear one of those.  I don't know how women do that."
Me: (I laughed, and tried to smile politely, not sure exactly what to say, and not able to get out: "it's not for everyone," before she continued.)
Checker:  "It's like those women who wear skirts al the time.  I would never do that."
Me:  (More laughter as I glanced down at my homemade maternity skirt).  And finally:  "Okay, thank you.  Have a nice day."

It was only then, by her silence and expression that I began to realize that she actually had meant to be rude.

I know I've heard plenty of explanations, but I've never quite grasped how my wearing a skirt (and I wasn't even wearing a headcovering at that time, although it wouldn't have been unusual here.  I pass women in headcoverings of various sorts, from scarves to burkas every single day), threatens or angers other women.  I just don't get it.

I guess we're just all free to be exactly the same, right?
Posted by Cammie Diane at 8:54 AM