Packing. With Lots of Help. 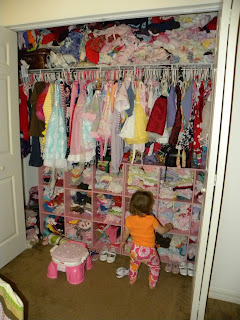 Mae Bae is on a mission.  Thwart Mommy from packing.  She decided, very early on yesterday, that she doesn't like to see me putting her toys into boxes and that the appearance of said boxes couldn't possibly mean anything good.  I tried to explain that we were putting the toys in the boxes to take them to Michigan, which lead to several minutes of screaming in outrage, while holding my hands to ensure that no other toys would disappear into the brown cardboard.

At the moment I'm online because packing is at a standstill.  Paul just went to the U-haul store to buy more of the fabulous, not twisty, brown packing tape (which I like so much more than regular packing tape that almost always twists and tangles and sticks everywhere except where it's supposed to) because, while I bought far more tape than I was told was necessary for the number of boxes I ordered, U-haul and I apparently have rather different ideas of how much tape should be used per box, and so, with half of the boxes remaining, all of the tape is gone.  Mae Bae now feels that she can play, because I'm not trying to put anything into boxes at the moment, and is now ignoring me and exploring the toys that have been uncovered by the layer of toys that are already packed.

So far I'm sorting toys into several piles.  There are the toys that are labeled to arrive safely in our new home.  There are toys that are destined to live in the basement until we hopefully find our own home, because, along with most of our books, because I'm not going to unpack all of our belongings if we're only going to be living someplace for six months (see!  I'm learning!).  I'm pretty much in love with the idea of having a garage and a basement after a year without any storage space whatsoever. 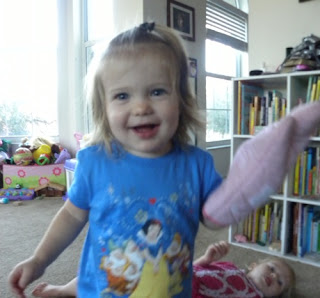 There are toys bound for Goodwill and toys that will stop by Once Upon a Child first, to see if they'd like to buy them (I finally decided that if two toddlers have completely ignored certain trendy, beautiful, plastic, light up toys, they will likely never be played with... and can be passed on to others who might have better luck with them and who will, at the very least, not pay full price for the new version).

The best part, however, was packing two very small boxes of clothes that fit right now, and two much larger boxes that make up my post-baby and if-I-ever-fit-into-these-again categories.  I'm definitely enjoying the idea of having storage space so I don't have to cram everything into the closet.

And now, more than twelve hours after starting this post, I'm finally able to come back to it with an update (and to actually finish it):

Paul came home with the boxes and the living room is almost completely packed.  The office is done (and most of the boxes from the living room have been moved into the office, which is now pretty full).  The dining room is mostly packed.  Tomorrow we'll tackle the bedrooms and check off quite a few errands.  And Paul is the hero of the night, after removing all the pictures from the walls, carefully bubble wrapping them, and boxing them al up.

Now to get some sleep so I have enough energy to do it all again tomorrow.  I am going to be so relieved when that truck is loaded.  Unpacking is so much less stressful than packing!
Posted by Cammie Diane at 11:02 PM