I now have a nice little stockpile of boy clothes, washed, folded and put away in The Boy's dresser.  I bought most of the outfits at Once Upon a Child, and then washed them in white vinegar (and detergent) when I realized that they all smelled like Gain (and since 3 out of 4 people in our house are very, very allergic to Gain and fabric softener).  Despite going through twice, I was still a little worried since they still smell like the detergent.  I'm hoping they're okay now (Mae was still getting welts after I used Gain once, when I had washed the clothing like five times... I'm hoping the vinegar took care of that though.).

Anyways, here is the dresser.  I laughed a bit when I put the clothing away, because back in the day, when I was pregnant with Sadie, I filled an entire closet and giant dresser with baby girl clothes (we did receive a ton of hand me downs, but I also went totally overboard with my baby girl dress buying).

This dresser is less than half the size of Sadie's old dresser and it easily fits all of our boy clothes, with room left over.  And with the two drawers on top still empty with room for socks and hats and diapers. 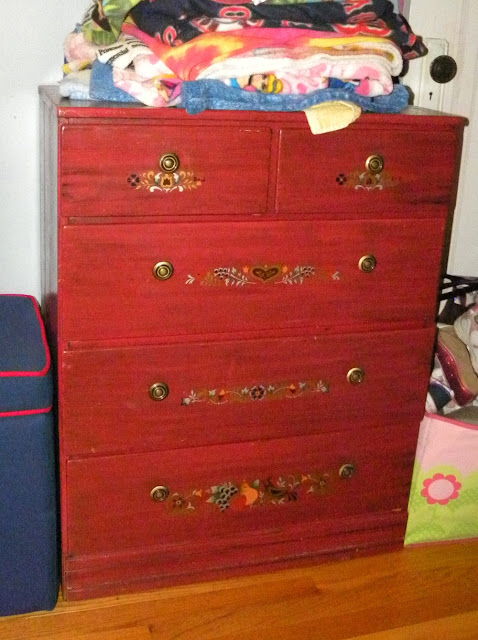 I feel like we have most of what we need for The Boy.  I've learned a bit over the years.  So far I only have one newborn outfit in my stash of baby clothes, because we have never had a "newborn" sized baby.  I was actually shocked to find the newborn outfit, and have to admit that I was sucked in by a cute teddy bear and corduroy fabric.  And since we usually outgrow the 0-3 and 3 month outfits in the first few weeks, I tried not to pick up too many of those either (I think Mae is wearing a 3 month outfit in her hospital pictures...).

The picture below shows out newborn, 0-3 and 3 month outfits.  About 1/4 of the drawer is made up of long sleeved fleece sleep sacks that I'm hoping will be useful when we're out and about this winter and the temperature is Michigan cold (I am so incredibly excited about the upcoming cooler temperatures!).  Thankfully they're 0-12 month in size (theoretically): 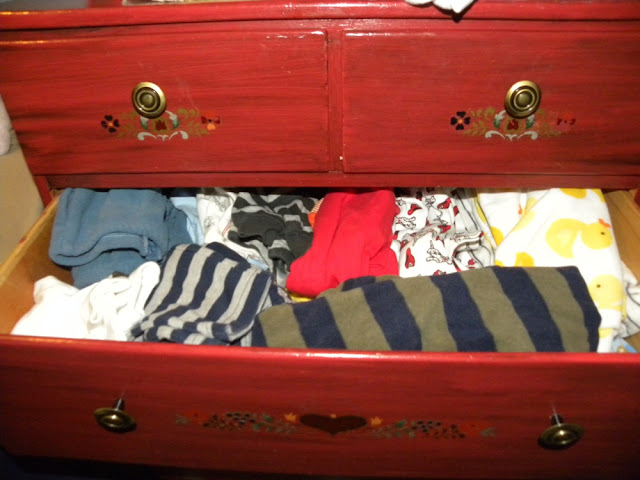 Here's the 3-6 month section.  I was really excited that I found a Red Sox track suit at Once Upon a Child.  I expect, as long as baby stays put full term, that he'll be wearing these pretty quickly, if he follows in his sisters' footsteps.

Sadie has picked out almost all of the new clothes that we've purchased.  She's learned to spot the clothes with the red clearance tags at Meijer, since clearance is pretty much the only way I'm going to be buying anything new.   She finds the red tags and picks out little boy outfits and shows them to me and explains that she's worried that he's going to be cold here in Michigan (during the last few trips I've kept her away from the baby clothes section altogether). 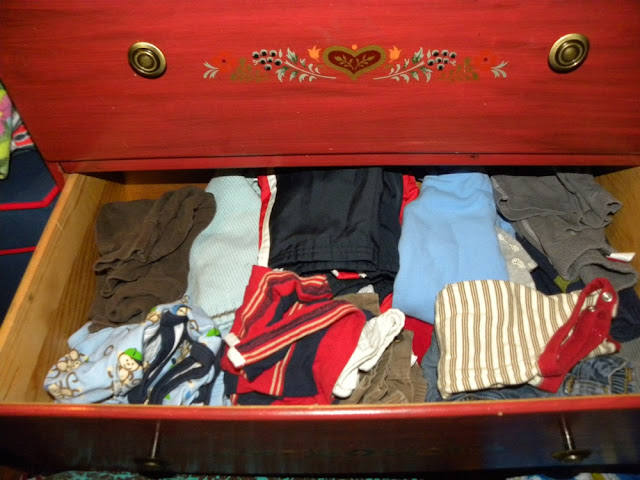 Lastly here are the 6-12 month outfits that already slipped into my shopping cart.  They mostly made it in during the Once Upon a Child shopping trip, when there was a special clearance sale and most of the outfits were only $1 (and we were selling them a huge bag full of toys that didn't make the move with us).  Most of these are in the six to nine month range, since I was fairly certain it will still be cold when the baby is wearing those. 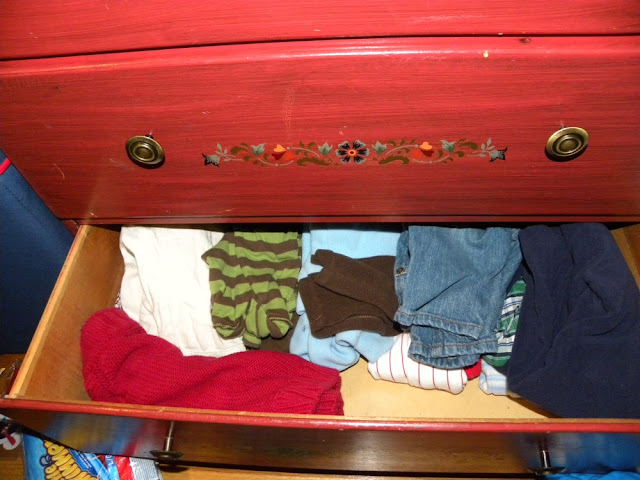 And of course, I have to show the girls' closet.  Now that we have a basement I was able to put a lot of the outfits down in boxes.  These outfits are the size 2-6x range that we have, with the 2s just about ready to make the move downstairs since Mae has pretty much outgrown them. 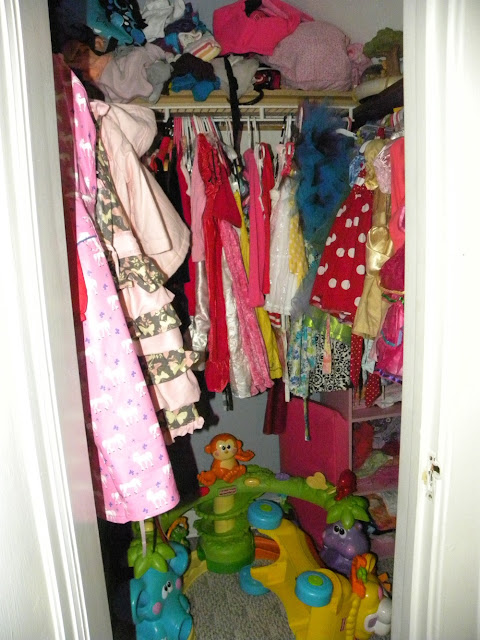