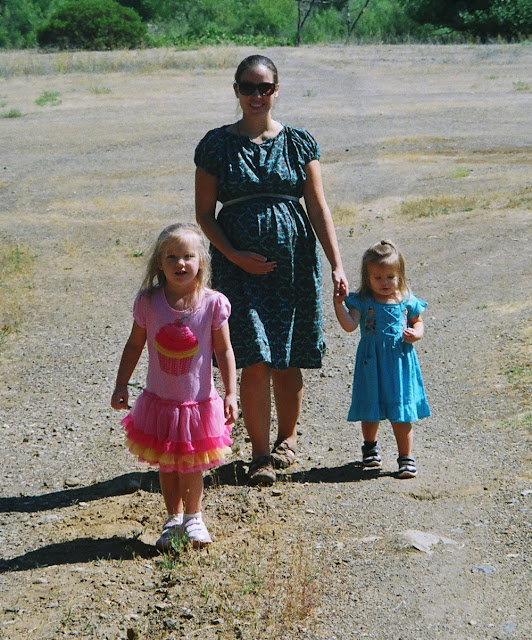 I made this dress before we left California, but this picture, snapped by Nani, which arrived yesterday on a photo cd, was the first one that was good enough to share.

Basically I took a gigantic piece of fabric and left space for sleeves.  Then I started sewing.  Before I added the elastic I called Paul in and showed him.  He looked at me like I was crazy, so to add to the crazy I held it up to him, as if I were making a men's shirt.  It looked like it was about twice his size.  His expression changed to serious concern.

Then I went back to work and inserted the elastic and made a little lace belt to go along with it.  The entire project took about four hours, which meant I'd finished it in one night, so I could wear it to Church the next day.

The next day I spent a good hour debating whether or not it looked like pajamas.  Paul said no, but I still wasn't entirely sure he wasn't just humoring me.

However it's since become my favorite dress, since it's so comfy and perfect for pregnancy.  Now I just need to finish the sewing room so I can focus on sewing again!
Posted by Cammie Diane at 1:03 PM

Email ThisBlogThis!Share to TwitterShare to FacebookShare to Pinterest
Labels: My Sewing Project, Sewing